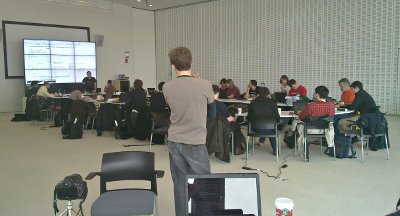 An update from the GNOME Summit where we’re reaching the third and last day of this great event. Attending the summit has definitely given me a much better idea of who are the real people behind those chopped-off heads from the GNOME Planet and who does what. I’ve been impressed and inspired by some of the people contributing to GNOME as a hobby and not because they are being employed by a company investing in GNOME. There are way too many people to name them all, but Jason from the marketing team is one of them. It has been also very enlightening to see how some of the people having the luck of getting paid for their work on GNOME had GNOME flowing through their veins and caring so much about things such as branding and how we should all be involved in GNOME directions as community members. In fact the common denominator of all those people attending is the passion that fuels their interest and commitment to GNOME and all its related issues. I was also very happy to meet Xan again, who also attended the GNOME.Asia Summit in Taipei this summer, and Srini from India and many more guys (the list is way too long).

On the third day we are lucky enough to be hosted in the MIT Media Lab which is a beautiful building with a splendid view on the river. We have a huge 9 panels LCD screen for presentations and discussions, plenty of rooms and empty spaces to drill down on all the potential issues remaining before the GNOME 3 release.

I’ve taken on the initiative to put up a group of sales presentations for GNOME, highlighting both the benefits and the technology of GNOME geared towards decision makers and engineers (so it’ll probably be 2 different presentations) to entice them to use GNOME on whatever project they’re doing. I’m hoping to use those more specifically for all the device manufacturers I meet regularly in South China and would definitely be excited to see products coming out with GNOME (rather than anything else).
So quite a few challenges ahead and some work to do as the information related to GNOME and its technologies or applications in the real world is spread over several persons within the GNOME community. But that’ll be a great way to meet more GNOME developers and make plenty of new friends!